Working in one country and living in another is a particular way of life, but not so anymore. The economic attractiveness of some destinations and the growing openness of frontiers encourage this practice, as European statistics confirm: in 2000 there were ca 500,000 cross-border commuters, in 2006 they grew up to 800,000 and now they are about 1.8 million (Eurostat, 2016). Numbers have almost quadrupled in 20 years!

South Tyrol plays an interesting role in this phenomenon: its number of cross-border commuters is not particularly remarkable, but the effort of the Province to provide competitive transboundary public transport is impressive. The results of such efforts are promising: ca 25% of transboundary commuters use public transport, while in several regions the average is below 10% (Connect2CE, 2018). To achieve this figure, the Province has addressed different aspects concerning connectivity (e.g. the introduction of several connections with Innsbruck and Lienz), tariffs/ticketing (e.g. the inclusion of the principal foreign destinations in the Alto Adige pass) and info-mobility (e.g. the inclusion of Tyrolean rail data on the regional webpage and app). Nevertheless, various challenges still need to be addressed, since cross-border transport still remains quite weak in comparison to regional transport.

To understand these specific challenges, the Institute for Regional Development of Eurac Reserach has organized a Stakeholder Workshop within the EU project Connect2CE (Interreg Central Europe, 2018). Thanks to this event, invited delegates from South Tyrol, Tyrol and from the Euregio have built up a “black list” outlining the main priorities for the development of a more appealing transboundary public transport supply. 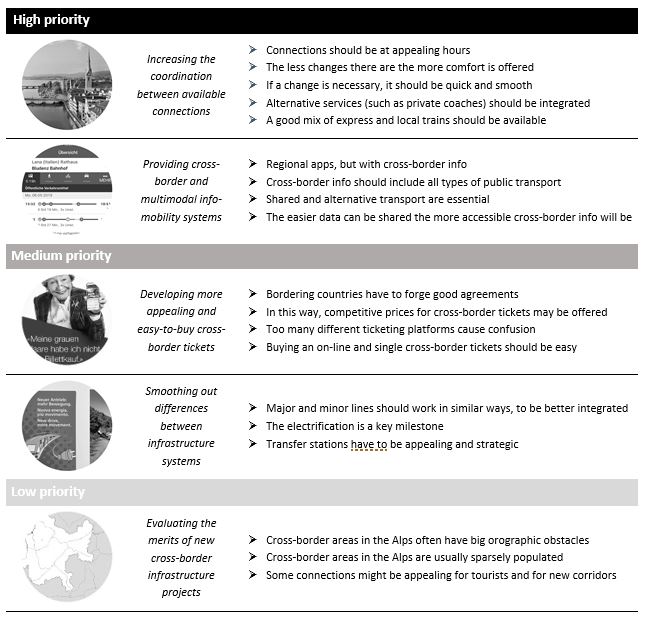 Based on these priorities, it is clear that cross-border public transport could be improved by pursuing greater synergy between the elements currently available. Indeed, if the large infrastructural investment projects are expected to make high-speed corridors more competitive (e.g. the Brenner Base Tunnel), the right amount of minor interventions could address regional needs by achieving a greater euro-regional integration.

The need of Open Spaces in the Alps: a transnational planning issue.

In order to give you a better service this site uses cookies. Additionally third party cookies are used. By continuing to browse the site you are agreeing to our use of cookies.